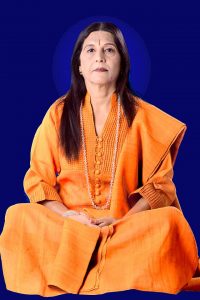 Guru-ma Shailaja Devi (affectionately called Maiyaji), was educated through the modern English system, she also received education and training in the fields of yoga and religion from her devout family and she received highly developed training in yoga through invisible persons in her dreams.

Maiyaji married Bapu in 1980 and is now mother of their two children. Following the dietary requirements of Bapu, she has not taken any salt or cereals since she married.

When she is not busy performing her own sadhana, she looks after the administration of the Ashram, and the catering facilities at the Ashram, whilst at the same time being a devoted and loving mother.

Maiyaji was also instrumental in planning, organization and construction of the Ashram in Rishikesh, on the banks of the River Ganges.

Maiyaji also guides seekers who attend the ashram, and spends considerable time everyday with female seekers, advising and guiding them as to how to carry out sadhana, along with their worldly duties.

This website uses cookies to improve your experience while you navigate through the website. Out of these, the cookies that are categorized as necessary are stored on your browser as they are essential for the working of basic functionalities of the website. We also use third-party cookies that help us analyze and understand how you use this website. These cookies will be stored in your browser only with your consent. You also have the option to opt-out of these cookies. But opting out of some of these cookies may affect your browsing experience.
Necessary Always Enabled
Necessary cookies are absolutely essential for the website to function properly. This category only includes cookies that ensures basic functionalities and security features of the website. These cookies do not store any personal information.
Non-necessary
Any cookies that may not be particularly necessary for the website to function and is used specifically to collect user personal data via analytics, ads, other embedded contents are termed as non-necessary cookies. It is mandatory to procure user consent prior to running these cookies on your website.
SAVE & ACCEPT