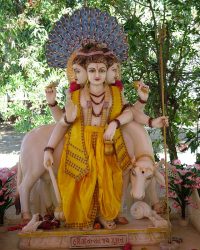 In Hinduism Lord Datta is the supreme Guru of the universe, is an embodiment of Christ Consciousness. He is in the form of pure energy but takes any and all forms when required.

He is the coalesced form of Trinity Gods – Creator, Preserver and Destroyer, i.e. Brahma, Vishnu and Shiva and is thus capable of doing and undoing the functions of any of the three.

Though omnipresent, it is believed that He makes His presence felt as and when remembered anywhere by anybody sincerely..

Despite popular belief, Hinduism is not a religion, but a way of way of life, that allows for all Gods and all beliefs, and is open to anyone of any religion. The core of the Hindu way of life, is to live life purely, and true to ones conscience. Within this context, Lord Datta is supposedly spreading the seeds of yoga, knowledge, compassion, truth, sincerity, purity, and faith, thereby elevating human beings to the highest pedestal of development i.e. Self-realization.

Though omnipresent, it is believed that He makes His presence felt as and when remembered anywhere by anybody sincerely.

At different times in human evolution, different religious and spiritual rites have been practiced, in accordance with the needs of humans at that time. In todays fast paced and modern lifestyle, there is insufficient time and inclination to spend much time in prayer, and as such Lord Datta has now offered a mantra of only a few words – ‘HARI OM TATSAT JAI GURU DATTA’ – for experiencing peace and happiness in these turbulent times, through chanting alone.

This website uses cookies to improve your experience while you navigate through the website. Out of these, the cookies that are categorized as necessary are stored on your browser as they are essential for the working of basic functionalities of the website. We also use third-party cookies that help us analyze and understand how you use this website. These cookies will be stored in your browser only with your consent. You also have the option to opt-out of these cookies. But opting out of some of these cookies may affect your browsing experience.
Necessary Always Enabled
Necessary cookies are absolutely essential for the website to function properly. This category only includes cookies that ensures basic functionalities and security features of the website. These cookies do not store any personal information.
Non-necessary
Any cookies that may not be particularly necessary for the website to function and is used specifically to collect user personal data via analytics, ads, other embedded contents are termed as non-necessary cookies. It is mandatory to procure user consent prior to running these cookies on your website.
SAVE & ACCEPT